McCulloch v. Maryland  is one of the landmark case in the history of the American jurisprudence where Supreme Court of United States decided on the powers of Congress on the State governments . United States is a Federal State which means there is a division of powers between Federal Government and the State Government . In 1816 Congress chartered the Second Bank of the United States which was opposed by many states governments . Some states opposed the function of the Bank and prohibited them in their jurisdiction . More than five states imposed taxes on the Second Bank of United States . Many states in the country faced economic difficulties due to the credit and lending schemes of the bank . James W McCulloch a federal cashier in the Baltimore branch of the bank refused to pay the taxes imposed by the state of Maryland on the bank . U.S. Bank in Maryland issued bank notes without paying the taxes and the case against the McCulloch was filed in the state courts of Maryland . The State Courts in Maryland decided the case against the McCulloch and in the favor of Maryland state . McCulloch reached Supreme Court in an appeal against the judgements of state courts of Maryland . Whether the Congress has the power to charter or incorporate a bank and federal government has power over the state governments to make such laws was left on the Supreme Court to decide . The case was between the Federal government and the State Government and to what extent can federal government exercise its sovereign powers . The other issue in the case was , Can a State Government impose tax on the US Bank . 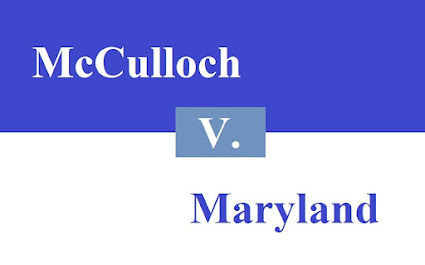 In many parts of the countries the decision by the Supreme Court was criticized . Supreme Court interpreted the Constitution and enlarged the powers of Federal Government over the State Governments  and said the power to make such law is an implied power of the Congress . The decision was believed to be against the strict and expressed implications of the constitution . This judgement later led to the foundation of  New Deal in 1930 and Welfare state in 1960 in the Constitution of  United States . The Court decided the case in the favor of McCulloch and the Second Bank of the United States was exempted to pay taxes to the State of Maryland .