Marbury v. Madison is believed to be one of the most important cases in the American Jurisprudence . In this case the Supreme Court in America recognized its powers of Judicial review . President John Adam from the Federalist Party passed the judiciary Act 1801 which is now known as Midnight Judges Act . President Adam in the last days of his tenure made many appointments in order to fill the government offices from federalists and one of his midnight appointment was William Marbury . Marbury was appointed as the Justice of the Peace and the papers for his appointment was signed by President John Adam and were sent to the Secretary of the State John Marshall . On 2nd March the paper for the appointment of Marbury as the Justice of the Peace were delivered to Marshall and on 3rd of the March they were sealed by him but the paper of the commission were not delivered . 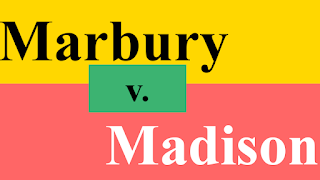 In the Presidential election of 1800 Federalist Party lost to the Republicans and Thomas Jefferson became the new President defeating President John Adams . When President Jefferson came to know about the midnight appointments made by the previous President John Adams , he refused the new Secretary of the State James Madison to deliver the papers of Marbury's commission. Marbury went to the Supreme Court in a 'writ of mandamus' under the Judiciary Act of 1789 where Congress has authorized the Supreme Court of U.S. to issue writ of mandamus in such cases . Under this writ of mandamus the court can command the appropriate authority to take action on the concerned issue . Marbury wanted to make his papers of commission to be delivered . Chief Justice John Marshall took cognizance of the issue and decided the case on the basis of these parameters . Whether the appointment was legal , and if the appointment was legal can a writ of mandamus be issued in this case .

In this landmark case Chief Justice John Marshall held that the appointment was legal as it was made by the U.S. President and had the seal of U.S. Government but that section in the Judiciary Act of 1789 directing Supreme Court to issue writs was unconstitutional and is not in the consonance with the Article III of U.S. Constitution . This was the first time when the U.S. Court recognized the power of Judicial review and held the law made by the congress as Unconstitutional . In this case the Supreme Court didn't issue the writ of mandamus as the section in the Judiciary Act of 1789  was in the odds with the Article III of U.S. Constitution .  Article III of the U.S. Constitution says " The judicial Power of the United States , shall be vested in one Supreme Court and in such inferior courts as the congress may from time to time ordain and establish " . The power of judicial review is not explicitly mentioned in the Constitution but the federal supremacy of the Supreme Court in the judicial system mentioned in Article III and the case of Marbury v. Madison made Chief Justice John Marshall to recognize the power of judicial review . Supreme Court exercised its power to make the laws and acts passed by the congress as unconstitutional and invalidate those laws which are not in the consonance with the constitution . At the time when this decision was passed by the Supreme Court it was considered as the decision against the President but later everyone realized the importance of the Supreme Court in protecting the supreme law of the land and judicial review as the dominant feature in U.S. Democracy . This decision was so crucial to the American Jurisprudence as the following quote from the Marshall's opinion is carved on the wall of the Supreme Court building which says "It is emphatically the province and the duty of the Judicial Department to say what the law is."