- April 23, 2017
Fourth Constitutional Amendment - 4th Amendment in Constitution: This amendment was passed to remove the difficulties created by the Supreme Court's decision in Bela Banerjee's case. The Court had insisted  for payment of compensation in every case of compulsory deprivation of property by the State. It was held that clause (1) and clause (2) of Article 31 deal with the same subject, that is deprivation of private property. In Bela Banerjee's case the court had held the word 'compensation' meant 'just compensation' i.e. a just equivalent of 'what the owner had been deprived of'. 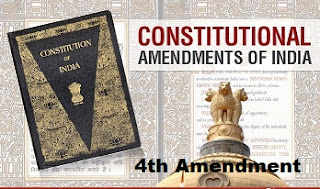 The amendment modified Article 31 (2) and made it clear that clause (1) and clause (2) deal with different things i.e. deprivation and compulsory acquisition. The new Article 31 (2) (A) made it clear that the compensation was only payable in the case of compulsory acquisition, i,e, where the State acquires  the ownership in property taken. The adequacy of compensation was also made non-judicially. The amendment broadened the scope of Article 31-A and included more statutes in the Ninth Schedule. It also amended Article 305 and empowered the State to nationalise any trade.