- April 23, 2017
Fifth Constitutional Amendment - 5th Amendment in Constitution: It amended Article 3 of the Indian Constitution. Originally, Article 3, did not prescribe a time limit for expression of views by the States on the States reorganisation laws. It was feared that the States could forestall the passage of State Reorganisation Act by not expressing their views for any length of time. The amended Article now provides a time limit within which the State have to express their views. If they do not express their views within the specified time the Bill may be passed by Parliament. 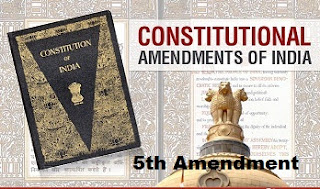 This Article envisaged that before Parliament passed an Act to re-organise the States, the Bill for the purpose should be referred by the President to the State Legislatures concerned for expression of their views thereon. A defect in the original Article 3 was  that it did not lay down a time-limit  within which the States concerned  were to express  their views. The absence of any such limit  could cause delay or even hold up Parliamentary Legislation for the purpose.

The Government of India was anxious to expedite re-organisation of the States on a linguistic basis and it apprehended that an aggrieved State might forestall the passage of the necessary legilation by Parliament merely by non-expression of its views for any length of time. The Amending Act therefore made it possible for the President to set a time-limit  within which a State must express its views. On  the expiry of the prescribed time-limit, Parliament could proceed with the matter without waiting for the views of the State concerned.
Amendment Constitutional Amendments Indian Constitution