- August 29, 2017
JUSTICE ANOOP V. MOHTA
M.A.,LL.B.
Born on 4th December, 1955. Enrolled as an Advocate on 12th February, 1981. Practised mainly at the High Court of Bombay, in Mumbai on both Original and Appellate Sides. Initially practised at Nagpur Bench. Dealt in Constitutional, Civil, Service, Criminal, Customs and Excise, Taxation, Educational, Commercial, Arbitration and Trademarks matters. Appeared on behalf of and against, various Public Bodies, Industrial Houses and Companies. Rendered services as Government Pleader and Public Prosecutor for Daman, Diu and Dadra and Nagar Haveli(U.T.) for four years. Was on the panel of Senior Counsel of the Central Government. Qualitatively contributed in books authored by Mr. V.A. Mohta, Senior Counsel, Supreme Court of India titled "Arbitration and Conciliation and Mediation" and "Trademarks, Passing Off and Franchising".
Elevated as Judge of High Court of Bombay on 14th November, 2003. 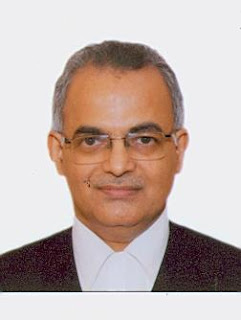 Justice Anoop V. Mohta bron on December 4, 1955. He was enrolled as an Advocate on February 12, 1981. He practiced for about 22 years in Original Side (Mumbai) and Appellate Side of Bombay High Court (Mumbai and Nagpur Bench). He served in Arbitral Tribunals, Special Court/Tribunals from 1981 and in the Supreme Court of India since 1987. He specialized in Constitutional, Arbitration, Intellectual Property and Criminal matters. He worked as Senior Counsel (Group I), Government of India in Bombay High Court from the year 1996, Standing Counsel and Public Prosecutor for the Union Territory of Daman & Diu and Dadra & Nagar Haveli from 1997 to May 1, 2001 (when he resigned). He was appointed as an Additional Judge of the Bombay High Court on November 14, 2003 and appointed as a permanent Judge on November 12, 2005.
Bombay High Court Judge High Court Judge