17th Amendment in Constitution of India

Article 31A of the Constitution provides that a law in respect of the acquisition by the State of any estate or of any rights therein or the extinguishment or modification of any such rights shall not be deemed to be void on the ground that it is inconsistent with, or takes away or abridges any of the rights conferred by article 14, article 19 or article 31. The protection of this article is available only in respect of such tenures as were estates on the 26th January, 1950, when the Constitution came into force. The expression "estate" has been defined differently in different States and, as a result of the transfer of land from one State to another on account of the reorganisation of States, the expression has come to be defined differently in different parts of the same State. Moreover, many of the land reform enactments relate to lands which are not included in an estate. Several State Acts relating to land reform were struck down on the ground that the provisions of those Acts were violative of articles 14, 19 and 31 of the Constitution and that the protection of article 31A was not available to them. It is, therefore, proposed to amend the definition of "estate" in article 31A of the Constitution by including therein, lands held under ryotwari settlement and also other lands in respect of which provisions are normally made in land reform enactments. It is further proposed to provide that where any law makes a provision for the acquisition by the State of any estate and where any land comprised therein is held by a person under his personal cultivation, it shall not be lawful for the State to acquire any such land as is within the ceiling limit applicable to him under any law for the time being in force or any building or structure standing thereon or appurtenant thereto, unless the law relating to the acquisition of such land, building or structure provides for payment of compensation at a rate not less than the market value thereof.

2. It is also proposed to amend the Ninth Schedule by including therein certain State enactments relating to land reform in order to remove any uncertainty or doubt that may arise in regard to their validity.

3. The Bill seeks to achieve these objects. 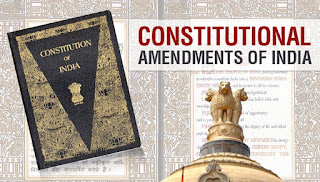 17th Amendment in Constitution of India

BE it enacted by Parliament in the Fifteenth Year of the Republic of India as follows:-

(i) in clause (1), after the existing proviso, the following proviso shall be inserted, namely:-

"Provided further that where any law makes any provision for the acquisition by the State of any estate and where any land comprised therein is held by a person under his personal cultivation, it shall not be lawful for the State to acquire any portion of such land as is within the ceiling limit applicable to him under any law for the time being in force or any building or structure standing thereon or appurtenant thereto, unless the law relating to the acquisition of such land, building or structure, provides for payment of compensation at a rate which shall not be less than the market value thereof.";

`(a) the expression "estate" shall, in relation to any local area, have the same meaning as that expression or its local equivalent has in the existing law relating to land tenures in force in that area and shall also include-

(i) any jagir, inam or muafi or other similar grant and in the States of Madras and Kerala, any janmam right;

(iii) any land held or let for purposes of agriculture or for purposes ancillary thereto, including waste land, forest land, land for pasture or sites of buildings and other structures occupied by cultivators of land, agricultural labourers and village artisans;'.

3. Amendment of Ninth Schedule.- In the Ninth Schedule to the Constitution, after entry 20, the following entries shall be added, namely:---

24. The Assam Sate Acquisition of Lands Belonging to Religious or Charitable Institution of Public Nature Act, 1959 (Assam Act IX of 1961).

33. The Gujarat Surviving Alienations Abolition Act, 1963 (Gujarat Act XXXIII of 1963), except in so far as this Act relates to an alienation referred to in sub-clause (d) of clause (3) of section 2 thereof.

Explanation.-Any acquisition made under the Rajasthan Tenancy Act, 1955 (Rajasthan Act III of 1955), in contravention of the second proviso to clause (1) of article 31A shall, to the extent of the contravention, be void.".
Amendment Constitutional Amendments

THE CONSTITUTION (SEVENTY-THIRD AMENDMENT) ACT, 1992
73rd Amendment in Constitution of India
Statement of Objects and Reasons appended to the Constitution (Seventy-second Amendment) Bill, 1991 which was enacted as the Constitution (Seventy-third Amendment) Act, 1992
STATEMENT OF OBJECTS AND REASONS
Though the Panchayati Raj Institutions have been in existence for a long time, it has been observed that these institutions have not been able to acquire the status and dignity of viable and responsive people's bodies due to a number of reasons including absence of regular elections, prolonged supersession, insufficient representation of weaker sections like Scheduled Castes, Scheduled Tribes and women, inadequate devolution of powers and lack of financial resources.
2. Article 40 of the Constitution which enshrines one of the Directive Principles of State Policy lays down that the State shall take steps to organise village panchayats and endow them with such powers and authority as ma…
Read more

Article 350B Constitution of India

- July 28, 2016
Article 366 in The Indian Constitution
Definition In this Constitution, unless the context otherwise requires, the following expressions have l, the meanings hereby respectively assigned to them, that is to say (1) agricultural income means agricultural income as defined for the purposes of the enactments relating to Indian income tax; (2) an Anglo Indian means a person whose father or any of whose other male progenitors in the male line is or was of European descent but who is domiciled within the territory of India and is or was born within such territory of parents habitually resident therein and not established there for temporary purposes only; (3) article means an article of this Constitution; (4) borrow includes the raising of money by the grant of annuities, and loan shall be construed accordingly; (5) clause means a clause of the article in which the expression occurs; (6) corporation tax means any tax on income, so far as that tax is payable by companies and is a tax in the…
Read more