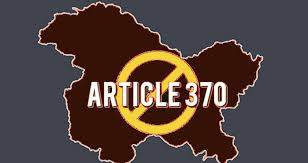 Days after the issuance of an order that effectively rendered Article 370 of the Constitution redundant, the President of India has formally declared the removal of this provision, which had signified the special autonomy granted to the State of Jammu and Kashmir.

"In exercise of the powers conferred by clause (3) of article 370 read with clause (1) of article 370 of the Constitution of India, the President, on the recommendation of Parliament, is pleased to declare that, as from the 6th August, 2019, all clauses of the said article 370 shall cease to be operative except the following which shall be read as under, namely:-

'370, All provisions of this Constitution, as amended from time to time, without any modification or exceptions, shall apply to the State of Jammu and Kashmir notwithstanding anything contrary constrained in article 152 or article 308 or any other article of this Constitution or any other provision of the Constitution of Jammu and Kashmir or any law, document, judgment, ordinance, order, by-law, regulation, notification, custom or usage having the force of law in the territory of India, or any other instrument, treaty or agreement as envisaged under article 383 or otherwise.'"

Presidential Order 2019 introduced on Monday provided that all provisions of the Constitution of India will apply to the state of Jammu and Kashmir, with a few exceptions and modifications. This meant Article 35A was also removed. The Order was passed invoking with the President's power under Article 370(3), which had stated,

"Notwithstanding anything in the foregoing provisions of this article, the President may, by public notification, declare that this article shall cease to be operative or shall be operative only with such exceptions and modifications and from such date as he may specify: Provided that the recommendation of the Constituent Assembly of the State referred to in clause ( 2 ) shall be necessary before the President issues such a notification."

The annulment of the 1954 Order also paved the way for the Centre to introduce the Jammu & Kashmir Reorganization Bill, 2019, to declare Jammu and Kashmir as a separate Union Territory with  a Legislature. Further, the Bill also provides for making Ladakh a Union Territory without a Legislature. The Bill was introduced and passed in the Rajya Sabha on Monday. On Tuesday, the Bill was passed in the Lok Sabha.

All these have have paved the way for Supremacy of Constitution and which means now onward there is no separate constitution for Jammu and Kashmir, No Permanent Resident, No Article 35A which was discriminatory in nature, no hijacking of power of Parliament by a single state in constitutional amendment and no statement in central laws like " This act is applicable to whole of India except state of Jammu and Kashmir"

Temporary article 370 still exist in the Constitution of India book but now redundant and dead as dodo.
Article 35A Article 370 Constitution